Chinese and Malaysian solar panels face 25% safeguard duty in India
The Indian government is likely to impose a safeguard duty (SGD) of 25 per cent on solar cells and modules imported from China and Malaysia for the coming two years, increasing the cost of more than 85 per cent of the solar capacity in the country.
Exempting all other exporting nations such as the US, the UK, and Taiwan, the Directorate General of Trade Remedies (DGTR) in a gazette notification has recommended 25 per cent duty in the first year, 20 per cent for the first six months of the second year, and 15 per cent for the balance six months.
The imposition of duty would be notified by the Department of Revenue, Ministry of Finance. The DGTR has not notified duty on the three solar cells and module manufacturers in the special economic zone (SEZ) area – Adani Green Energy, Vikram Solar, and Websol Energy.
The notification said the issue of levy of SGD on sales/clearances by SEZ units falls under section 30 of the SEZ Act and Section 8B of the Custom Tariff Act, 1975, and hence “required to be dealt by the relevant competent authorities and outside the purview of this investigation.” The Indian Solar Manufacturers Association (ISMA) had filed an application in June last year with the government claiming imported solar cells have flooded the market, causing injury to the domestic industry. The association urged for a SGD for a level playing field.

The Directorate General of Safeguards (DGS) in its preliminary report in January this year investigating had suggested a duty of 70 per cent on the imports coming from China. The DGS was merged with other trade remedial bodies under the umbrella organisation DGTR in May.

The DGTR held a hearing of all stakeholders in the matter, including ISMA, Indian power project developers and their association, exporting countries – China, Taiwan, Europe, the US, and their respective trade associations and government officials. 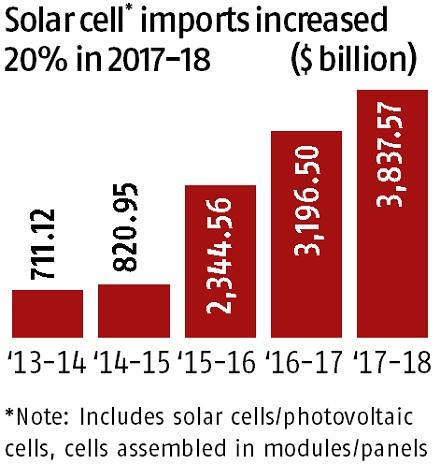 In its final recommendation, the DGTR observed that the position of domestic industry “further deteriorated on account of continued low price of import of product under consideration (solar cells and modules) which continued price injury to the domestic industry, thereby establishing the threat of injury as well.”

The DGTR took into consideration the market share and profitability, which sharply declined over the injury period 2014-2015 to 2017-2018 (annualised) whereas market share of imports have increased during the same period.

The Indian solar manufacturing had asked for 95 per cent SGD on imports. On the other side, Indian project developers and more than a dozen importers from China, Taiwan, Canada, etc said any SGD would be detrimental to India’s solar target. In its application, ISMA has estimated that with a duty of 20 cents/watt, the increase in power tariffs would be Rs 0.7 per unit. The project developers however, have calculated the increase to be around Rs 1-1.5 per unit.

The current installed capacity of Indian solar cell manufacturing is around 1,386 Mw and the module is close to 2,500 Mw, according to government estimates. Less than 20 per cent of the manufacturing capacity is operational due to low demand. Of the total solar power generating capacity, more than 80 per cent is built on imported cells from China, 10 per cent from the US, and the balance domestic. India’s current solar power installed capacity is 21,000 Mw.

New Maruti Suzuki Swift vs 2018 Hyundai i20 interior images: Which cabin is better and why?

Grab Vivo V9 at Discount of Rs. 7750 on Flipkart Big Shopping Day Sale: Here’s How You Can Avail

JioFi now at Rs 499 after a cashback , Here’s How You Can Avail

Good to hear and waiting to use

i want to do this job because i really like this department. thanks

CONFIRM WHETHER IT IS FOR HYDERABAD CITY ALSO

IS IT AVAILABLE FOR HYDERABAD CITY?